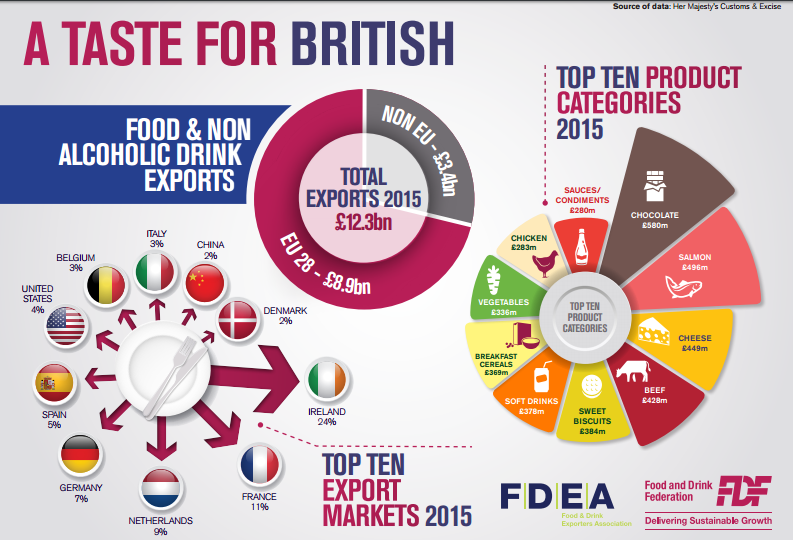 Exports of branded food and non-alcoholic drinks grew by 0.9% to £4.63bn in 2015, representing the 15th year of consecutive growth.

While overall exports fell by £0.6bn to £12.3bn in 2015, the Food and Drink Federation (FDF) is expecting that to change in 2016, particularly with the pound weak against the euro and dollar, which will make exports cheaper.

Chocolate, salmon and cheese remain the top three export product categories, while exports of vegetables, both prepared and fresh, experienced the largest increase in overall growth, up £18m in 2015 to £336.3m.

Non-EU markets now buy 30.8% of the UK’s total branded food and non-alcoholic drink exports. The value of exports to non-EU markets was up 6.4% on 2014 figures, with double-digit growth seen in Saudi Arabia, Japan and Australia.

Exports to China grew by 9%. This is the first time that the world’s most populated nation entered the UK’s list of top 10 overseas trade partners. In 2014, the UK was the EU’s number one exporter of tea to China, while exports of processed milk to China rose by £19.3m (+202%) in 2015.

“What these statistics show is that there is a real appetite for British products across the globe, where our food and drink products are recognised for being high quality, safe and innovative.

“We need to make sure small and medium-sized food companies in particular are helped to compete in the fiercely competitive global marketplace.”

This update was provided to us by the Food and Drink Federation and written by Ted Woodward.