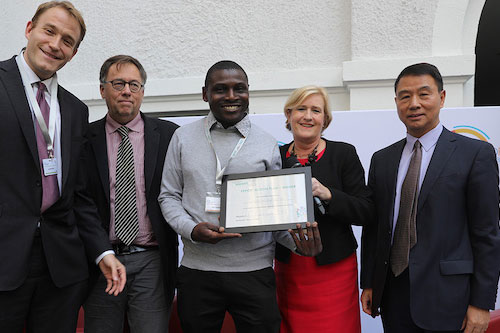 6 Months On – Dytech Limited on Winning the International Business Awards

In the autumn of 2018, we hosted the final of the inaugural Open to Export International Business Awards in Geneva at the WTO Public Forum. Dytech Limited (Zambia) won what was an inspiring competition, impressing the judges with their plans for growth in Europe and China and the social impact of their growth back in Zambian communities.

We caught up with their CEO, Alan Chanda, six months on from winning the $5000 cash prize.

You won the competition over six months ago now. How have your exports progressed in that time?

We have had a very busy time since I won the wonderful and eye-opening Open to Export International Business Awards final on 4th October 2018 in Geneva, Switzerland. First, we successfully managed to complete both the training of 100 women and the distribution of one thousand, highly productive $4 ZamHives® units for rural outgrowers.

We have had more demand during this training period than anticipated, despite restricting the number to just a hundred. We had planned for each woman to receive 10 ZamHives® units, but we ended up with 300 attendees. So, we have decided to also equip the extra 200 youths and women who turned up for training with beehives from export revenues.

We have reached a deal with two Chinese companies who will buy 500 tons of honey from us – both in bottles and bulk loads of the branded SweetHarvest™ Pure Honey – for the 2019 to 2020 period. Further, we have been able to export to Germany 80 tons and Egypt 20 tons since December 2018.

What impact did winning have on your business? How have the prizes contributed?

The impact has been very impressive – it has allowed our social enterprise strategy to be supported by other organisations who came to learn about our model at the final we won in Switzerland. We have since won another award from the Gates Foundation, winning $16,000 through their partner CIVICUS programme, largely because Open to Export offered Dytech the rare opportunity to showcase our business.

This means we will train 500 rural youths and women, equipping each outgrower with 10 beehives. Our ZamHives® low-cost beehives highlighted our innovative model during the International Business Awards leading to us being selected for the Live Expo Dubai 2020 Innovation Impact Grant For $100,000.

Dytech Limited are as much a social enterprise as an export one. What impact did the competition have on the communities you work with in Zambia?

The impact on communities we work with has been huge – they are now benefiting more than ever because the honey is being exported to global markets. It’s been a very important moment that has brought more beehives and ultimately money into the communities from other awards such as from Gates Foundation and the Dubai Impact Grant.

Since our participation in the Open to Export International Business awards in Geneva, Switzerland in 2018, we now have more exposure and name recognition, which is highly rewarding. Using the prize money, we had planned to build 1000 ZamHives® for 100 women to produce 100tons per season. However, Dytech will now be offering rural honey outgrowers 4000 ZamHives! We will be training and equipping 500 rural outgrowers instead of just 100.

We are still being highly sought after, and we have been invited to speak and be interviewed on radio, TV and social media in Zambia. We are now poised to export the largest single honey consignment from Zambia to Germany and China this year of 200ton.

How important is it to keep working on your plan?

We are still working on our plan as it has allowed us to go from selling to 3 export destinations to 6.  It’s very important to keep working on it because it helps maintain a high priority focus on the export procedures for all destination countries. Further, it’s helped us to set the cost structure and pricing for our export destinations.

What’s next for Dytech Limited?

Dytech Limited will now begin to focus on a rapid growth strategy to meet the rising demand for honey in the export markets. The revenues from exports will be used to increase our rural outgrowers from 2,500 to 10,000 people and production capacity to 3,000 tons of honey by 2022.

We will develop the partnership with European and Chinese distributors of our honey brand. This expansion will increase our exports into Europe to 300 tons and China to 300 tons of honey per year by 2020. Further, we will make use of the Chinese market through an office which has been offered to us by our local partner company, located in an industrial park in the city of Chengdu, in late 2019.

The grants from Dubai Impact Program and Gates Foundation will be used to produce 25,000 ZamHives® low cost $4 beehives, further increasing the production capacity and impacting more people in rural Africa. We are also set to commence exports of the Honeyman Sweet™ in the form of lollipops, candy & lozenges in various flavours (i.e. pure, banana, mango, lemon, ginger, pineapple, cashew nuts & groundnuts), Pure Honeyman Cubes™ (for tea or coffee) and low cost ZamHives® beehives to clients by the end of 2019.

We have also planned to expand our carpentry capacity from 50 pieces per day to 200 to produce ZamHives® that meet the export market of 100,000 beehive units that we already have in Nigeria, Ethiopia, South Africa and Angola.

We will be attending our second China International Import Expo 2019, having gone for the first time ever in 2018. Here we expect to find more import companies willing to buy our honey products.

What three tips would you give to SMEs looking to enter the next competition?