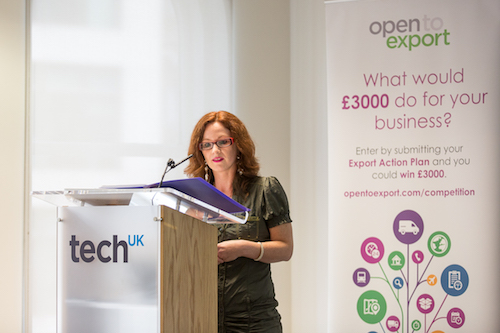 Following our recent Export Action Plan showcase at GTR UK, we spoke to each of our competition finalists about their plans for export success.

What does your company do at the moment and what’s next?

At the moment Zenith Nadir is about to play at a number of venues throughout the Summer.  We will continue to look for support for our upcoming plans – our European Tour.  We are working on a new album which will be recorded this Summer here in the UK and launched next year.

How has the Export Action Plan helped with your exports?

It has helped to consolidate what we want to achieve within the next two years and also the markets we wish to export our services and merchandise to.

How have you found the experience of the final today?

I think this experience was great in 2017 live and also it has been an excellent experience this year, 2019 when recording the video.  I would like to know more about what the judges enjoyed and some feedback would be fantastic.  We are also considering many other offers and competitions at the moment and their insight would be very useful and beneficial.

What tips would you give to other new exporters?

It is important to investigate everything, learn as much as you can, meet the right people who can impulse your business into the world arena and taking calculated risks is worth it in the end.

Zenith Nadir is an eclectic mix of electronic rock with Latin rhythms such as salsa, cumbia, danzon, mariachi and banda, a combination of electric violin, keyboards, bass guitar, lead singer and programming from Mexico City and the UK and widely considered as one of the most creative, futuristic and innovative bands in the independent scene.  The band has toured five times in the UK and twice in Mexico, as well as playing in Spain selling music in different countries in South America, Europe and beyond and released four amazing albums independently available in all online digital stores!

The UK connection: Electronic violinist Selina Marshall is from the UK, and while on a year abroad in Mexico City she met Alex.  After working together promoting bands with their own independent record label and making programmes for their internet TV channel, Alex asked Selina if she wanted to start the band Zenith Nadir. They invited Emmanuel to join them, making this dynamic Mex-UK-futuristic musical trio which is Zenith Nadir.

The band launched their own merch in 2016 independently, available in the online shop, overcoming obstacles and hurdles put in their way.  Now, based in the UK, they continue to forge their own path in music. The band has appeared on major radio, TV stations, newspapers and magazines in Mexico as well as local press in the UK. David Burns from BBC Radio Humberside described the band as “really colourful” and Pete Bassett said, the music “makes us feel like every day is summer!!!”, as well as being mentioned in the albums section of Rollingstone Magazine – Mexico Edition, in March 2017, the band took part in the “Open to Export Showcase Final” in London and was one of the top 10 finalists.  The band is working on new music, more UK Tours as well as, planning a European Tour.

William
Previous Post
Exporter Case Study: Sea Chips
Next Post
Have you thought about taking your business to Hong Kong?