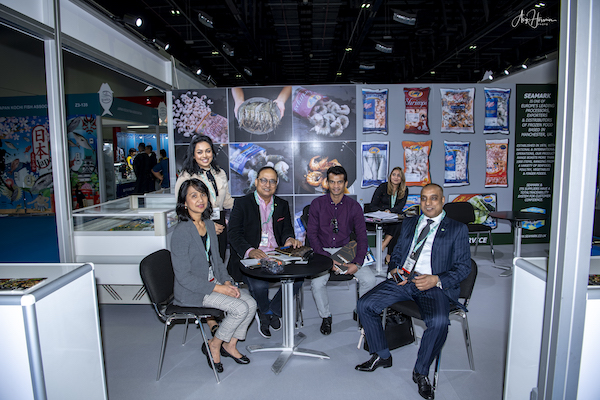 I had the opportunity to attend Seafex trade show recently, which is located alongside three other food shows (Yummex, Speciality Food Festival, and Gulfhost). Held in Dubai, United Arab Emirates (UAE), at the end of the every year, this represents one of countless trade shows spread across the world for the international food and drink industry.

During the show I had the chance to speak with Nahid Iqbal, Executive Sales Director of Seamark – a Manchester headquartered seafood export and import business. A major player in the seafood industry, Seamark is one of the Europe’s leading processors, exporters and distributors of frozen food and has been since it opened its doors in 1976. With national and international operations in the UK, Europe, Asia and the USA, Seamark is truly global in its ambitions and capabilities. They were a recipient of the 1998 Queen’s Award for Export Achievement.

Watch my interview with Nahid, in which she reflects on her work in the seafood industry, how international her work is, being a woman in a senior-level role in seafood exports in a male-dominated industry, and how her business is preparing for Brexit.

Catch up with all of Richie’s interviews here.