What does importing involve?

This article comes from a 3-part interview we ran with John Robinson, the Chairman of the Academic Board at the Institute of Export & International Trade, on export readiness and what exporters need to know about importing.

John also runs the Institute’s ‘An Introduction to Importing’ course.

When sending goods overseas there are things like incoterms, and the relationship between the freight forwarder and the exporter. Is there a different recommendation for importers or is it just the other way round?

The best way to involve incoterms in importing is to take a short step back and try to appreciate that an international trade sale or purchase, export or import, is just a different end of the same contractual obligation. For every import there has to be an export, and for every export someone is out there importing. 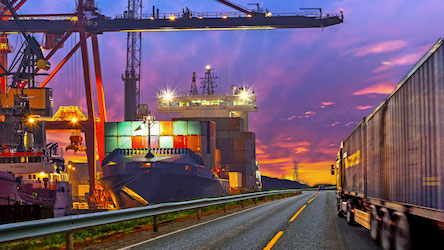 Can many of the skills of import be applied to export?

It’s just a different end of the same transaction. I would suggest that the different more complex regulations from different governmental departments mean the importer’s knowledge may have to be slightly more refined.

One of the most important things to remember is what I said about origin. The number of so-called FTAs around the world has doubled over the last 3 or 4 years and this is only going to increase. This isn’t just the EU but we’ve seen what Trump is looking at doing to NAFTA. More and more FTAs are cropping up around the world, each with their own particular regulations.

All these FTAs offer reduced customs duty. They say you let our stuff into your country at a reduced duty and we’ll let your stuff into our country. This means lower customs duties such that FTAs are beneficial to both buyer and seller. Yet, you’re going to have to acknowledge more and more of them and therefore the origin of goods is going to become more crucial to international deals because of the reduced rate of duty it can bring in.

The other side of the coin is that it reduces the revenue for the importing country’s government. The country’s government will say we did the deal and we will honour our commitments to reduce our revenue, but because it’s reduced revenues for us, we must have proof that the goods are genuinely of the origin that the exporter has stated. Statements of proof of evidence will only get more important because of this.

What does a proof of origin constitute?

A supplier’s declaration of origin has become accepted by most customs authorities around the world, otherwise there are some strict rules of origin to adhere to. The UK’s customs authorities (HMRC) publish some very useful guides on origin in their customs notices but the whole issue of evidence of origin is quite complex. It’s the importer who’ll have the issue though, when things do get complicated, because it’s his government who will hold the goods up in customs.

And in terms of FTAs, obviously the UK is saying its going to get loads of FTAs with different countries, but this could mean more work for companies figuring out how the different FTAs affect their different particular exports. How are companies going to deal with navigating their way through a greater multiplicity of trade deals?

One of the published HMRC notices on origin has a very useful table or spreadsheet which says which country you are importing from and then it splits it down into what your product is, is it affected by an FTA, what documents do you need to evidence show its origin.

The hard work has been done by HMRC in publishing these public notices. With the passage of time it’s going to become a lot more convoluted before we end up with an amount of customs duty to be paid.

Part 1: Am I ready to start exporting?

Part 2: What do exporters need to know about importing?