Could the UK join another trade bloc?

In 2020 the UK leaves the EU – its largest trade bloc – and one of the main arguments for Brexit is that it will enable the UK greater liberty to sign free trade agreements with other countries like the USA. But what is a trade bloc? How does it differ from a free or preferential trade agreement?

The first thing to note is that a free trade agreement (FTA) is usually signed between two parties. For instance, the UK is looking to agree an FTA with the EU for its continued trading relationship with the trade bloc.

A trade bloc is a multilateral agreement between several nations, or ‘parties’, rather than an agreement between just two countries or parties. So, although the EU comprises several trading nations, it in fact forms a single trading party when it comes to other agreements – i.e. the EU is trading with the UK as a single party rather than 27 and so it is negotiating a trade agreement. The UK, by leaving a trade bloc, is retaining its right to negotiate trade deals as a singular entity. This is largely what is meant when the UK is referred to as a ‘third party’ in negotiations with the EU.

The UK couldn’t previously negotiate trade deals with the USA or China by itself, because it would have had to do have done so as part of the trade bloc it was a member of – i.e. the EU. However, there are different forms of trade blocs – the multilateral North American Free Trade Agreement (NAFTA) doesn’t preclude the USA from negotiating its own trade deals.

Outside of the EU it will be able to negotiate trade deals with other nations, as well as the FTA it is pursuing with the EU. You can read more about FTAs here.

What forms can a trade bloc take? 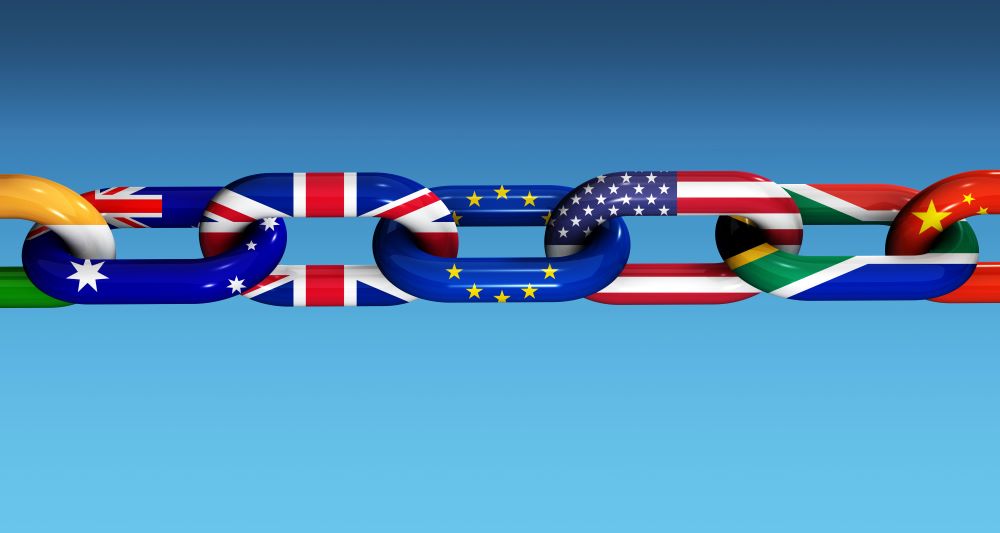 There are different forms that a trade bloc can take, including a Free Trade Area, Customs Union, Common Market and Economic Union.

A Free Trade Area, like NAFTA or Comprehensive and Progressive Agreement for Trans-Pacific Partnership (CPTPP), allows for members to reduce or abolish trade barriers such as tariffs and quotas between themselves, but allows members to retain its own tariffs for non-members – i.e. it allows members to negotiate trade deals with 3rd parties without being tied to other members of the Area.

A Customs Union also reduces and abolishes tariffs and quotas between members but does so in a way that requires all members to adopt common tariffs, quotas and standards for outsiders. Being a member of a Customs Union effectively precludes a member party from being able to negotiate trade agreements with non-members – which was the situation the UK had as a part of the EU Customs Union.

A Common Market sees members agree to reduce restrictions on the movement of factors of production, like finance and the movement of people, as well as tariffs and quotas. Again, the UK will be leaving the EU Common Market allowing it to retain sovereignty over immigration policies on who can and can’t enter the UK from other EU nations, for instance.

Economic Union goes even further than a Common Market establishing common economic policies on such things as taxation and interest rates and, even, a common currency. In some respects, there is Economic Union with the EU – EU VAT code for instance – but the UK, not being a member of the Eurozone, did not have a common currency with all EU parties.

Could a post Brexit UK join another trade bloc in the future?

The UK is leaving the world’s largest trade bloc and its future trade relationships look set to be based on bilateral Free or Preferential Trade Agreements. For instance, the UK looks set to negotiate a free trade agreement with the EU as a single party and a bilateral agreement with the USA looks set to be a priority for the UK following Brexit – so it appears unlikely that the UK would join NAFTA!

However, despite not being a pacific nation, the idea of the UK joining CPTPP has been raised. This would allow the UK to have reduced or removed tariffs and quotas with the following nations:  Australia, Brunei, Canada, Chile, Japan, Malaysia, Mexico, New Zealand, Peru, Singapore, and Vietnam.

The UK could join CPTPP, thus reaching agreements with several key trading partners including Australia, Canada and Japan, while retaining the option to negotiate free trade agreements with non-CPTPP nations – unlike its membership of the EU.

However, the UK may also look to secure trade deals with nations like Australia and Canada in particular (as Commonwealth nations) which have more preferential rates than that which membership of CPTPP would secure. Also, whether the UK trading one trade bloc for another would be politically viable remains to be seen.

If you want to learn more about rules of origin, the IOE&IT runs a regular training course on ‘Understanding Rules of Origin, Free Trade Agreements & Export Preference’. On this course, delegates gain the knowledge of how origin is established, how to complete the relevant documentation and the internal requirements to support the process.