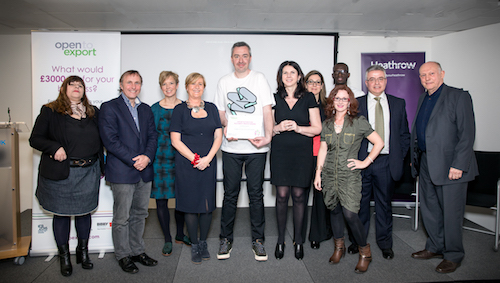 On Thursday 30 March, Open to Export hosted its first Tech meets Creative showcase at the TechUK offices in London, featuring the last of three Export Action Plan finals taking place across the end of March, with the other two being for the food and drink sector and the East of England.

10 companies from the two sectors pitched to the judges for the £6000 worth of prizes. Sponsored by SDL Managed Translation, Heathrow Airport Limited, Yell and the Institute of Export and International Trade, and supported by DIT, the finalists were invited to the final after submitting their Export Action Plans using Open to Export’s online planning tool.

The Tech meets Creative showcase unsurprisingly featured a broad array of exciting and innovative ideas and products, as well as an expert presentation on IP from Virtuoso Legal and case study Yoomi, and an evening of networking and drinks. After an introduction from Simon Spier, Head of International Trade at Tech UK, Alpaca Comfort opened the presentations, cosying up to the judges with their natural fibre filled bedding which they are looking to export in the colder climates of Scandinavia – samples were included which was of great comfort for the audience and judging panel. Via a conference call from South Africa, Beatpixels then managed to successfully convey their innovative products for the audio-visual and media industries in what was the first of the many futuristic technologies on show throughout the day.

Merging tech and creative, the next finalist – four three six – bought a taste of the urban underground to proceedings. As a mix of record label, art curator and fashion label, they get artists to make designs for producers and in turn these designs are turned into wearable tech – or as founder Andy McAlister demonstrated, t-shirts. Inside the t-shirt, is a code through which you can download the initial inspiration for the t-shirt – the EP – online. On a more practical note, button-fix – who create secure and discreet panel fixings to be attached to walls – were looking to use the prize money and their action plan to launch a PR campaign in the US to promote their products. The next finalist, MyManu, were perhaps the most futuristic of all the finalists with their MyManu Click product which claims to be the world’s first smart wireless ear buds with live voice translation in 37 languages– a product which ‘Hitchhiker’s Guide to the Galaxy’ fans will surely appreciate.

The theme of Tech meets Creative certainly bought a healthy dose of variety to the showcase as the second half of the day saw a mix of tourism, skincare products, 3D design, fashion and music being presented. Organic active natural skincare product producer Potionshop were next up with their plans to grow sales in Norway and to improve their web presence, growing B2B sales in particular, while Raptor3D Design deal in the cutting edge technology of 3D visualisations and animations and specialise in interior and exterior architectural imagery for commercial buildings, residential projects, hotels and restaurants.

The Travelling History Company represented tourism with their guided tours of the historic landscapes of Britain for families, while Lily Wustefeld bought things back to the future again with her London-based fashion label Lily Edinburgh, which she hopes to grow into Canada and the USA in order to reach a global audience. The final act saw the first ever band at an Open to Export final – Zenith Nadir play electronic music with Latin infusions and want not only to tour Europe and sell merchandise there, but also to export the cartoon designs and styling of their album artwork.

While the judges were tasked with the hard task of having to decide a winner, the finalists were then treated to a keynote presentation on the importance and challenges of protecting such great ideas internationally.

Philip Partington from Virtuoso Legal, who specialise in Intellectual Property, gave a whistle-stop tour through the complexities of protecting designs, copyright, trademarks and so on around the world, following Jim Shaikh’s retelling of his experiences exporting Yoomi, the first self-warming baby bottle, to markets global markets.

After much deliberation a winner was indeed decided and four three six were announced as the winner of the Tech meets Creative competition. In a meeting of the two sectors, it was perhaps fitting that the company that truly bridged tech and creative through music, art and wearable tech were picked as the winners. The competition process has made me think big about export, and given me the confidence and resources to hit the Japanese market head on.

The prizes they won included £3000 cash, a new website build and consultancy from Yell, two training courses from the Institute of Export, and a year’s membership at the Food and Drink Exporters Association. They also won, along with the other finalists, a £300 website translation voucher from SDL Managed Translation and a year’s small business membership at the Institute of Export. When Tech met Creative industries we expected it to be lively and innovative but nothing could have prepared us for the brilliant range of business ideas which provided the judges with another hard decision.

Lesley was joined on the judging panel by Robert Gorby, CEO at SDL Managed Translation, Stuart Birrel, CIO at Heathrow, Richard Hanscott, CEO at Yell, Simon Spier, Head of International Trade at TechUK, and Chris Hurne, Head of Music and Games at the Department for International Trade.